Return on Investment - A modern center can host entertainment and sporting events as well as conventions and meetings to drive economic impact and quality of life for our fellow residents. With a new venue, we could host the likes of U2, Taylor Swift, and Kendrick Lamar concerts, NCAA men’s basketball tournament games and national conventions bringing thousands of visitors to Hamilton County and The Banks.

• A new venue will help sustain businesses at The Banks, especially during Reds and Bengals off-season.
• This venue will round-out The Banks to encompass all aspects of entertainment for people to enjoy.

The Project - A facility that can compete against facilities in Columbus, Cleveland, Louisville, Indianapolis or Kansas City will require demolition of Heritage Bank Center and construction of a new facility by a public entity. The project cost is estimated to be approximately $350 million.

Potential Funding Sources: Extension, Investment, Return - With ownership of the property in the hands of a public entity, public dollars could be used to finance the project. That public entity would also receive the net income from operations of the new Heritage Bank Center to repay any public debt and fund other priority public initiatives. One approach would be to fund the project over a seven year period by extending the ¼¢ sales tax that was used for Union Terminal and by dedicating a combination of other revenue streams including building revenues, parking revenue and admissions tax, etc. Approximately 45% of the sales tax is paid by people who live outside of Hamilton County, and the annual impact of a ¼¢ sales tax to the average Hamilton County resident is approximately $23.00. 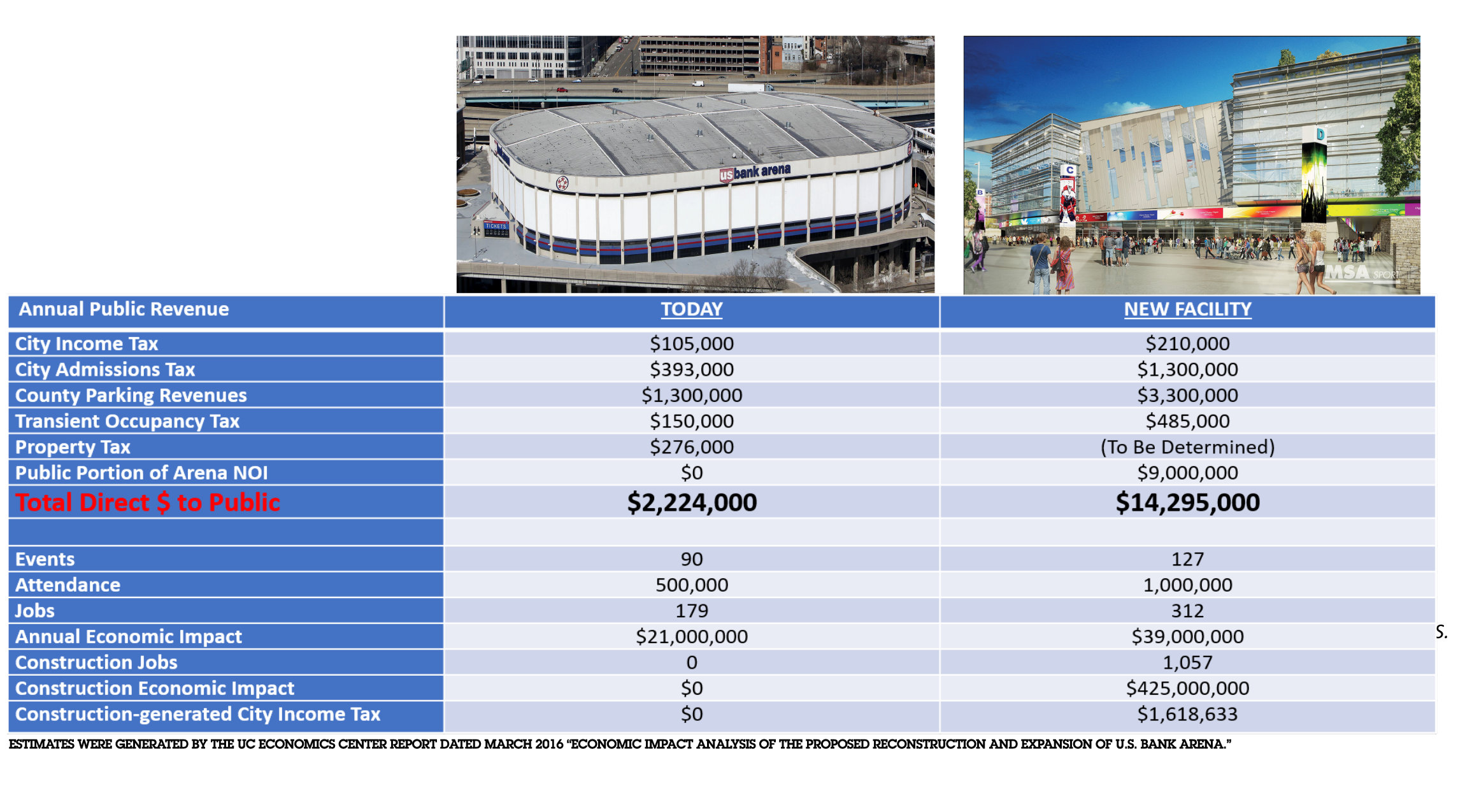 Return on Investment – A Smart Investment
It is important for Cincinnati to have a modern center to host entertainment and sporting events as well as conventions and meetings to drive economic impact and quality of life for our fellow residents. With a new venue, we could host the likes of U2, Kendrick Lamar and Taylor Swift concerts, NCAA men’s basketball tournament games and national conventions. This new facility will help the sustainability of businesses at The Banks, especially during the winter months when the Reds and Bengals are in the off season.

With a projected annual economic impact of $39 million and over $14 million annually in public revenues, the public’s investment is more than justified. Not only does this project enhance our quality of life, but it also returns the initial investment and provides additional funds to the taxpayers of Hamilton County for further investment in their community.

Share your thoughts on the new vision using #WhatsNextCincy!